The political boss, in the version released in Spain and restored by the collaboration of the Spanish Film Library and the Arxiu del So i la Imatge del Consell de Mallorca. Soundtrack composed and performed live by Miquel Brunet

NOTES ON MUSIC, COMPOSER AND PERFORMER

La Réponse du destin is a silent film made released in 1926 in Paris, by the French director André Hugon, and filmed in the Majorcan town of Bunyola (the birthplace of the composer of the soundtrack), Palma, Madrid and Paris.

While the pandemic is cruel to the population, the lawyer and politician Leopoldo Quintana tricks to get his interests and benefits. With blackmail and shady maneuvers, he becomes a deputy for the Balearic Islands, then a minister and finally, president of the Council of Ministers. The hatred that he accumulates around him reaches the point where he ends up being abandoned by everyone, even his lover. This is the plot of the French film `` The Political Chief ''. And no, no one should think that it is a current film: André Hugon shot it between 1921 and 1925. In 1924 the filming moved to Mallorca - Palma and Bunyola - in addition to Madrid and Paris and it was released in 1926. Beyond of silent aesthetics and in black and white, the actuality of its plot extends to the present day and shows that the present is not as innovative in events as one might think.

"Having to put music to a silent movie filmed in your hometown is an exciting challenge, due to the absence of dialogue and the need to continually reinforce the image without falling into the risk of annoying pointillism." According to the composer, the complexity increases because, being a 100-year-old film, there is no feedback from the director regarding the music or the possibility of agreeing to work with him. Although the initial thought was to set the music to be composed at the same time, Brunet finally decided on a timeless style when checking "the plot coincidences of the film with the present day". To show a button: the film begins with a pandemic, with their Epi suits, politicians inventors of vaccines, a politician complicit with the business elite to exercise the hydroelectric and flour control of the island. "For this reason, the composer found the material musical base for the credit titles, in an old folk song from the Balearic Islands (En aquesta Illa so poor) whose translation reads as follows: “

"On this poor island,

those who rule it,

they cut where it suits them best, keeping the most favored part for them "

As far as the instrumentation is concerned, the composer did want to connect with the years of filming and premiere of "The political boss" (1924-1926). In addition to the piano - the usual instrument in the accompaniment of silent films - Brunet also wanted to incorporate the Theremin, one of the first electronic instruments, created in 1920 by the Russian inventor Léon Theremin. "It connects us with that time, since it was invented only a few years before the filming of the film," explained Brunet, in addition to noting that he has used it for "the most cruel and tragic scenes" due to the disturbing and mysterious nature of the film. instrument sound. Finally, thanks to the use of a “looper” with samples from the piano itself, the soundtrack makes the long journey of connection with the present. 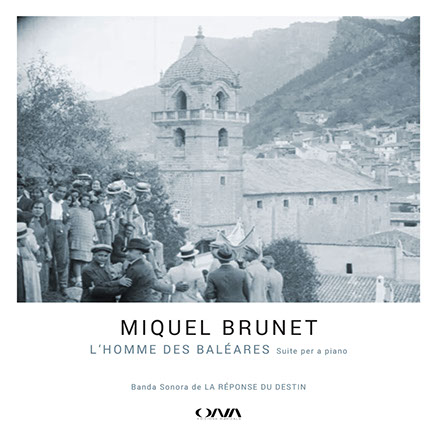 An exciting and stimulating job for the musician, especially when in several of the centennial film, his maternal grandfather, among other relatives, coincidentally appears with clear clarity.

Now, after years of disappearance, the restoration of this film, by the Arxiu del So i de la Imatge (ASIM) and the Spanish Film Library, was finally able to premiere at the closing of the Atlàntida Film Fest in 2021 on August 1.

Composer and producer Miquel Brunet was in charge of putting on the soundtrack and playing it live on the day of the screening. The task of the Sound and Image Archive and the Spanish Film Library has been to give meaning to the surviving fragments with the help of the original novel, and to restore the images as much as possible using new technologies.